﻿ ﻿
A typical day for me consists of two good rounds of cooking meals, maybe some menu planning, fraternity shenanigans, some warm comments regarding meals, and then moments such as the one I experienced this week, meeting The Smoking Vegan.
This semester we have a new pledge...Sydney.
Our first encounter began with an introduction,  names, etc. and then the worst news I, a former bakery owner, could ever receive.  Aubrey was equally dismayed at this announcement.  Mr. Sydney is a full on vegan.  No dairy, no meat, no eggs, no no no!
I am sure the look on our faces was one of stupified bewilderment.  We felt jilted, abandoned, forsaken.  It's our life's work, the concoctions of butter, flour, cream, sugar, sprinkled with bacon that he has rejected.  Well, how can I question a young man's resolve?  How can I be the cause of his demise?  So we proceeded with a small kitchen interview to see, what in fact, this new recruit would be eating here.  We came to the conclusion that we do have some things he might enjoy, that are free of any animal products...rice, beans, rice with beans, rice and salsa, beans and chips, any fruit or veggie void of the lusciousness of a buttered saute skillet, but food nonetheless.
So as I was leaving for the day, pondering my new challenge.  I take a double take behind me to what...? What do I see, but the committed, unwavering, solid as a rock Vegan?  SMOKING!  Oh how did I want to just take that cigarette and fry it up with some good bacon and a pound of butter, topped with cheddar cheese.  Don't think I just walked away.  No. I confronted the smoking scoundrel and simply stated, "A Vegan? Right!"  Well, okay I guess he is entitled to correct part of his life, but Vegan?  I mean really! For every puff I just see that big soy dinner blow up in smoke.
I am so mean.  No, I'm sarcastic.  And if this isn't a better opportunity for sass and sarcasm, what is?  I am still a softie when it comes to my 'boys'.  So, Aubrey and I made our little grocery trip to buy the hungry pledge some Silk soy milk.  We also had enough heart to make him his own batch of chili, his very own bowl of butterless veggies, and his portion of rice which was free of any of the fajita shrimp or chicken.
Come on, this is his home away from home.  Who else is gonna cook food for him?  It's gotta be me. Sydney, as long as you're here, we'll feed you.  And when you decide you can't stand by watching your future brothers indulging in homemade biscuits that are 3 inches tall, we won't judge, we'll just fill up your plate. 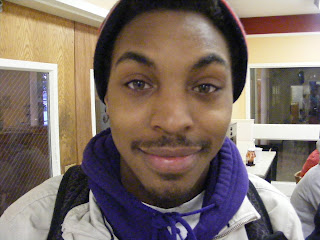