Cloudy with a chance of Happy! 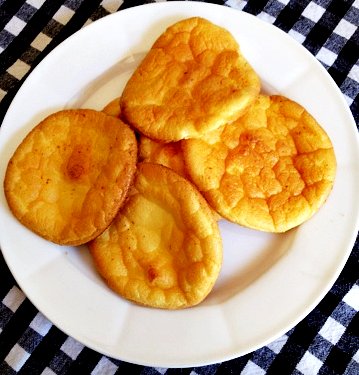 Well, I finally made the 'Cloud Bread'
I have changed my eating since May and have pretty much said Adios to Carbios!
Until now I've pretty much stuck to healthy low fat proteins, 30 carbs per day comprised of greens, veggies, and some fruit.  (or the occasional crumb of chocolate)

Anyway, I gawk at Pinterest like the rest of us and after typing in 'Carb Free', I came across Cloud Bread. I wish I knew who to give the credit to, but this recipe is the same in every blog I came across.
In the photos it looks like a puff of love just waiting to take me back to a good ol' PB&J.
What I have missed most about my decision to live without carbs is something to put my somethings in between...whether it be turkey and cheese, garlic butter, or pizza toppings...I miss the structure of real bread made with real flour and yeast.
What I don't miss is the 22 pounds I have lost, the world war that went on inside my gut on a daily basis, and the blood sugar roller coaster.  But we can talk about all that some other time...let's talk about this Cloud Bread...
First the recipe...
Oven 300
3 Eggs, separated
3 Tablespoons whole milk cottage cheese, greek yogurt, OR cream cheese-I used cream cheese
1/4 teaspoon cream of tartar
1 tsp of Splenda, Stevia, or your favorite sweetener-I used Splenda

You're going to need two bowls and a mixer.
Bowl 1 - 3 egg whites - don't get any yolk in there.
Bowl 2 - 3 egg yolks.
Bowl 1- sprinkle the cream of tartar over the egg whites and then mix until stiff peaks are formed...not wimpy bent over peaks...stiff, standing at attention pointy peaks.
Bowl 2- mix your yolks well with the sweetener and the dairy ingredient of your choice.
Gently using a rubber spatula, FOLD the egg whites into the yolk mixture.  Do this by first gently pouring the whites into bowl 2, then carefully bringing the ingredients up and over the top of the whites.
Basically, don't stir it to death or the air in the whites will be lost and it will become runny.
Once the mix is fully incorporated, it should look like a fluffy golden souffleish mixture.

Grease a cookie sheet
Using an ice cream scoop or large spoon, drop spoonfuls onto the greased baking sheet.  I made mine bun size but they could be larger and shaped however you might like it...if you want to have a hoagie style sandwich then stretch out the drop on the pan.  Or make the round larger for a pizza.
Bake for about 30 minutes or until golden brown on top.
When done, set on a cookie cooling rack and let them cool.  It doesn't take long at all.
For the soft cloud bread, place them in a sealed container or Ziploc bag.
If you want something crunchy, keep them in the oven about 4-5 minutes longer and don't put them in a container or bag.

5. THESE ARE TERRIFIC USED AS SOMETHING TO PUT YOUR SOMETHING IN BETWEEN!!!
6.THESE ARE AWESOME AS A PIZZA CRUST!

THE BAD
1. THEY TASTE QUITE EGGY...A LITTLE LIKE A CHOUX CREAM PUFF PASTRY .... IT'S A PASTRY MADE WITH EGGS! 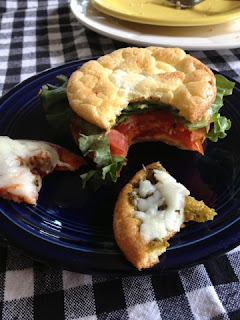 I enjoyed this as an alternative to bread.
I think I will play around with the mixture added to the egg yolks.
Also, when I made the Pesto Cloud, the edges got quite crispy, so I suspect that a light brush of olive oil and a sprinkle of Parmesan and Italian herbs might render a nice crunchy crouton that would be perfect with a salad!

Let me know what you think if you give this a try.

Christie
Posted by Christie at 4:50 PM