Recently, I have been perusing the multitude of Mommy Blogs on the web.  It made me take a minute and ask myself how I ended up making a living in the art of cooking....
My mother will tell you she is not a great cook and she has no idea where I learned to cook.
I might have thought that too without some deeper thought.
I mean how can I forget the Lint Pork Chops? No, not Lent, Lint.  I guess she had tried a new recipe, but those chops were gray and looked as if they had been rolled in the lint fresh from the dryer.  It was very funny, one of the few times my dad was able to see the lighter side.
Despite the occasional dinner disaster, I find I have been influenced by her more and more. As a child, she somehow infused useful household tidbits into my spongy little brain, such as putting egg shells down the disposal to sharpen the blades.  Or praying to St. Anthony for any lost item.  (It actually works!)
My mom was a 70's mom.  The days of liberation.  Canned soup casseroles, frozen dinners, and Hamburger Helper.  An era telling women to get it in the oven and get out of the kitchen.  It was a competition to try the latest recipe on the back of the soup label.  Dinner time was a difficult marriage in the kitchen...old fashioned scratch cooking was betrothed to Women's Lib sprinkled with pepper.

My dad came from a  family of passionate yellers, loud laughers, and BIG eaters.  Fried chicken, fried okra, and fried potatoes were mainstays on the menu.  He was a very demanding man and when it came to cooking, his mom was a hard act to follow for his bride.  There wasn't enough grease in the world that would fill him up.  My mom, on the other hand, was raised in a quiet, simple, mild mannered family eating small meals made up of simple foods, small portions of meat, homemade bread, fresh or home canned veggies, either from their garden or another local farmer.
Well, that recipe, 1 cup of Betty mixed with 1 large order of Barry, was a souffle waiting for the fall.  Eleven years later, she kindly asked him to take his appetite elsewhere. (I am happy to report that they are both happily RE-married to much better dinner partners.)
Anyway, my sweet momma might not have been cooking out of Julia Child's cookbook, but what she did phenomenally well was raise a garden right in the middle of suburbia. She grew tomatoes, cucumbers, lettuce, radishes...you name it, she grew it.  She even made jelly from bitter crab apples that grew from the tree my brother and I spent our summers climbing.  Her simple upbringing out in the middle of Kansas brought about the best things in a meal; the freshest garden goodies we all long for!
BLT's with fresh tangy tomatoes right out of our garden were the highlight of our summers.  To this day, she and I will eat homegrown tomatoes on a plate with salt and pepper until we have heartburn and canker sores.  She still has all the equipment for canning tomatoes, making jelly, & pickling cucumbers and she continues to make a little something every summer.
You know that wonderful salad we pay $12 for with hot bacon dressing? She did that way back then.  Wilted Lettuce Salad.
The garden thing is a family thing.  My mom has four sisters that have all been blessed with the green genes as well.  All of us kids, the sons and daughters of the five, spent our summers feasting on fresh garden bounty produced by our industrious parents and grandparents.  One of our favorite summer treats was Radish Sandwiches.  Oh how I can almost taste it now...fresh baked white bread from Grandma's oven, smeared with oleo (the old name for margarine), layered with sliced red radishes fresh from the dirt, sprinkled with a little salt. There was never enough bread to go around!
I remember fishing with my Grandpa and bringing back the catch of the day, cleaning and preparing them for our mothers and Grandma to make for dinner.
Maybe my mother didn't teach me how to make a bechamel sauce, but she did teach me the best part of the meal, the sharing of it.
These simple yet rich and decadent memories embedded on my heart are the ones that I have found give me the inspiration to gather my family together to share love, laughter, and great food.

Thank you Mom for the gift of yourself and your talents and for the forever blessings of our family.
I love you.

Wash & prep lettuce.  Tear into smaller pieces.  Sprinkle with sugar,bacon and green onions.
In the same pan the bacon was cooked, drain all but 2 Tbsp of the remaining grease.  Turn on medium heat
and add salt and vinegar.  Cook until it's sizzling and bubbly.  Remove from heat and pour over lettuce.
Serve immediately.  Olive oil can be substituted if bacon is not preferred.
Enjoy! 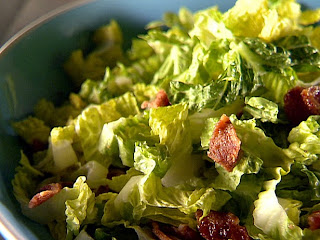